How to Detect A Fake Security Camera – Most people opt for fake security cameras because they are relatively cheaper. Some use them to complement real security cameras to create the illusion of wider security coverage.

In both cases, the hope is that potential criminals will see the security cameras and that this will be enough to discourage them from trespassing, vandalism, or theft. This works in some cases.

However, it rarely works as far as experienced criminals are concerned. This is because it is how to detect a Fake Security Camera easily. The following are the simple ways through which anyone can spot fake security cameras.

Here are the best 5 ways How to Detect Fake Security Cameras:

If a security camera has blinking lights, especially if they are easily visible, it is likely fake. This is because these lights are designed to attract attention. They serve no other purpose than to draw attention in the hope that it will deter any potential trespasser.

Genuine units do not have blinking lights because these lights don’t serve any useful purpose when it comes to capturing or processing a security feed.

What these units have is infra-red technology. This technology allows the cameras to be able to record at night. Therefore, you will notice a faint glow when you are close to a genuine unit.

Most fake security cameras try to mimic this glow. Unfortunately, they always overshoot. This usually leaves these cameras with really bright lights inside. Therefore, if the camera that you are looking at has bright lights, it is likely fake.

The first easy giveaway is usually the cables that the camera uses.

Genuine cameras have relatively thick cables. These cables are thick because they transfer data and also transmit power to the camera system. And for a given camera system, it is normally one cable doing both.

Therefore, if you spot a camera with really thin cables, it is likely fake. This is because fake security cameras are designed to cost less. They use thinner cables since these cables are cheaper.

Also, since these cables do nothing, they don’t need to do anything. As such, they are relatively thinner.

To create the facade of motion tracking, some fake cameras are designed to swivel. They do this at regular intervals. And sometimes they do it randomly. Whichever the case, if the camera swivels, it is likely fake. This is because cameras with in-built motion tracking capabilities track movement with specialized sensors, but they do not swivel.

However, this does not mean that there aren’t any real cameras that swivel. These types of cameras exist, but they tend to be expensive given the cost of creating the swiveling motion. Therefore, if the camera looks affordably priced, and if it swivels, it is most likely fake.

If you are looking at a wireless security camera, it is easy to tell whether it is real or fake. To do so, simply move close to the camera and then turn on your phone’s Wi-Fi functionality. Look at the Wi-Fi signals that your phone detects. If the camera is real, your phone should be able to detect its signal. On the other hand, if it is fake, it won’t show up as a Wi-Fi device.

Genuine security cameras have brand names prominently displayed. This is because the companies that manufacture them are proud of their products, and this is an easy way to market themselves.

If a security camera system does not have any visible branding, it is likely fake. Chances are that they are trying to obscure their identity. This is something that manufacturers of genuine security cameras do not do.

Furthermore, there are a few prominent brands that specialize in manufacturing cameras. Learning about them, their logos and any other relevant markings will make your work easier. And even for those that display a brand name that you are not familiar with, a simple Google search is all it takes for you to be able to tell whether they are fake or not.

This is probably the most reliable method of how to detect a fake security camera. The only thing that you should keep in mind is that some manufacturers of fake security cameras try to be sneaky by using misspellings of common brand names or slightly altered logos or markings.

Apps for Camera Detection: How to Spot a Fake Security Camera?

You can also use the Google Play Store to spot a fake camera. This is because it has some apps that are designed to help you not only detect security cameras near you but also determine whether they are working or not.

Therefore, to find out whether a security camera is real, simply download and install the app. Launch it and then use it to search for security cameras in your vicinity. If the camera does not show up, it is likely fake.

Although it is not a foolproof method, you can still tell the difference between a real camera and a fake one by examining their build quality. This is because no matter how affordable a real camera is, the manufacturers always go an extra step to ensure that it is built with relatively good materials. Even those that are made up of plastic normally use decent-quality materials. On the other hand, fake cameras tend to use cheap plastic since the main goal during their manufacturing is to produce them at the lowest cost possible. Therefore, poor build quality is an easy giveaway.

However, this method has a limitation, in that you will need to be close enough to the camera to tell whether it has a poor build quality. While it may work for front door security cameras, it may not be as effective when it comes to cameras that are placed at places that are not easy to reach. 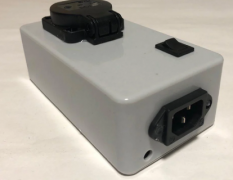 How to Add Voice Control to Your Smart Home Devices